Three years ago, Toronto City Council broke its own procedures and opted to scrap a fully funded rapid transit line. If not for this egregious mistake, a 7-Stop Scarborough LRT from Kennedy through Scarborough Centre to Malvern would be under construction now.

Instead we have a politically-fueled promise to extend the Line 2 subway. One stop.

Today, Council had the opportunity to stop the bleeding of the misleading promise to build “a Scarborough subway.” Instead of changing tracks and building a rapid transit network for Scarborough, Toronto Council has instead doubled-down on the initial mistake; ignoring the preferable alternative, and pushing the One-Stop Extension forward for further analysis.

Since Council is composed of individuals, we would like to bring attention to the 27 councillors (in red) who have again discarded the opportunity to bring Scarborough more and better transit faster. 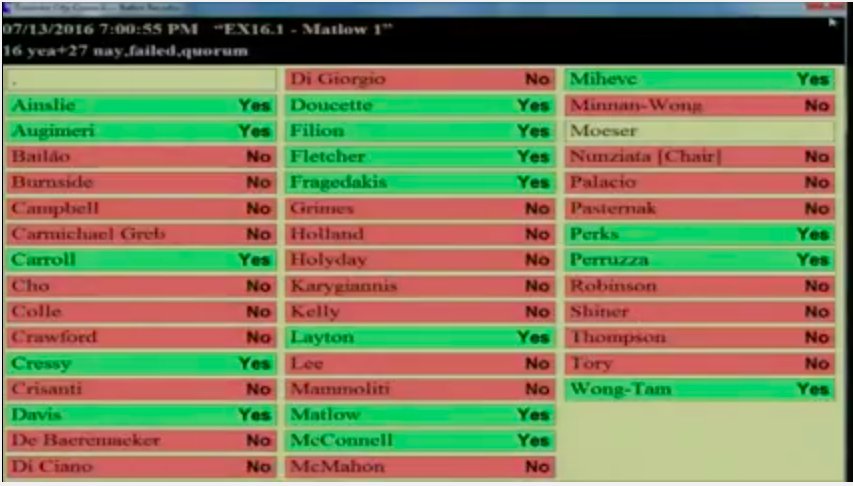 As transit riders, we are not opposed to subways; we often travel by subway. But we also travel by bus, streetcar, and GO train. We wish that we could also travel by LRT. Instead of being able to easily travel to more places, as would happen with an LRT network, we are spending our time on long rides on unreliable buses. As Toronto continues to analyze the One-Stop Extension, we will continue these long and unreliable bus rides until at least 2025, and probably longer.

What we are opposed to is the obsession with subways that has infected the transit debate in Toronto. This infection is most severe in Scarborough.

In the lead up to this Council decision, some subway advocates promoted the idea thatspeaking against the subway was a sign that a person hated Scarborough. If this is true, then why are our allies at Scarborough Transit Action, 1LoveMalvern, and UTSC advocating for LRTs? In effect, subway opportunists have tried to silence the voices of people who need and care about transit in Scarborough by acting like they do not exist.

Another decision has been made, and more time and money have been wasted, but we know that this is not over. In 2013, Council scrapped a rapid transit line that was already designed and fully funded. In 2016, the One-Stop Extension is far from being as advanced as the 7-Stop LRT was in 2013. In a city that refuses to raise money to pay for things, $3 billion for a tunnel and one station is an openly terrible idea. And terrible ideas do not proceed without challenges.

Since this issue is not over, we will continue to stand alongside and promote the voices of Scarborough transit riders. Together we will end the subway obsession that is blocking our mobility.